We weren’t sure what was going to happen as we sat around the fireplace. No one was around. Maybe the thing was canceled? Or maybe we came to the wrong place. If there was a show or some kind of event, there would probably be signage or an employee setting things up, right? But nope, there was none of it.

Then Uncle showed up. He wore simple clothes and a nice hat. He walked with a cane, and introduced himself as a low-level employee who did maintenance. He just changed the lightbulbs, he said. Uncle did have some time on his hands, and wondered if we wanted to hear a story. We did, that’s why we were there.

Last week, I went to Aulani, Disney’s big Hawaiian resort(1).It’s a Disney resort, with plenty of characters like Mickey Mouse around, experiences for kids and a huge emphasis on theming. In the grand scheme of things, themed hotels and resorts are the minority. You see a lot more hotels vying for a more classic, classy style of hospitality rather than centering everything around a theme. And from that subset, you barely see any of them taking on experiential storytelling. But Aulani does, and it does it really well. 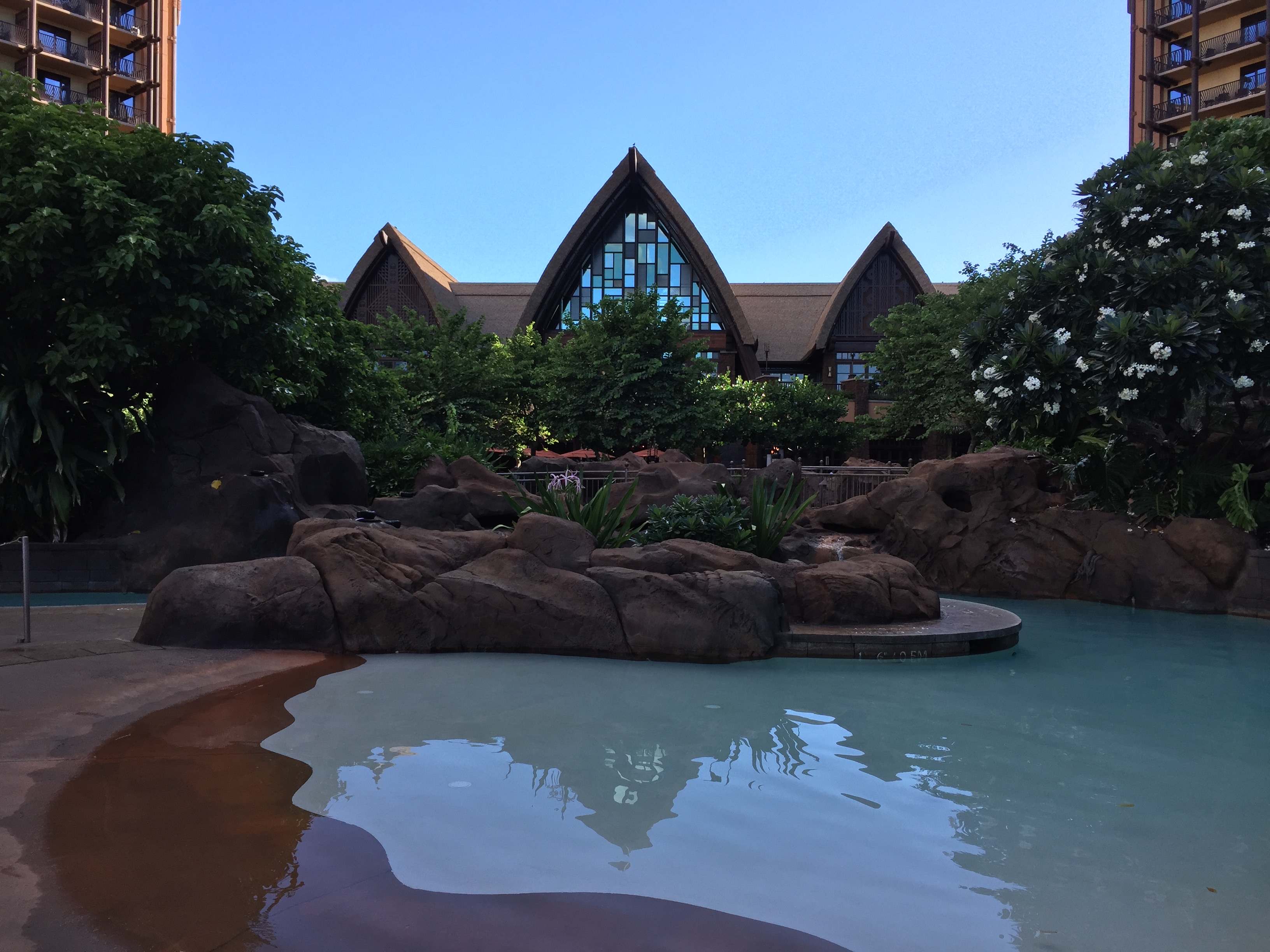 Everyone talks about VR. Storytellers, whether game designers or filmmakers, are taken by the idea of virtual reality. They want to use experiential storytelling to put people within a story, to have them experience something they can’t in real life. It’s a great idea, and many people have experienced it for themselves. But what if we already had something better? Something that was far more tangible than putting a headset on your head.

The thing about theme parks that people don’t get is that the rides are not the real reason people go. If people just wanted fast and thrilling rides, they’d go to an amusement park like Cedar Fair or something. And plenty of people do! But there’s a reason why the two dominant forces in theme parks are Universal and Disney; they do theming better than anyone else.

There’s a reason people are excited for Star Wars Land, or that park attendance shoots up when Universal opens a new wing of the Wizarding World of Harry Potter. The magic of a theme park is experiential storytelling, putting people within an environment and telling them a story with the details around them. Like the best entertainment, it offers an escape. Star Wars fans can get harassed by Stormtroopers, or Harry Potter fans can sip on butter beer while the old wizard at the wand shop finds the perfect wand for them.

The story around Aulani is a simple one. Sure, this is a big resort in a beautiful place that wants to suck your money away and leave you satisfied enough to return many, many times (and maybe even buy a timeshare!). But the resort also makes it clear that this is a place that wants to act as an intermediary. It wants to collect people who aren’t from Hawaii, and it wants to put them in direct, constant contact with Hawaii, its culture and its people. 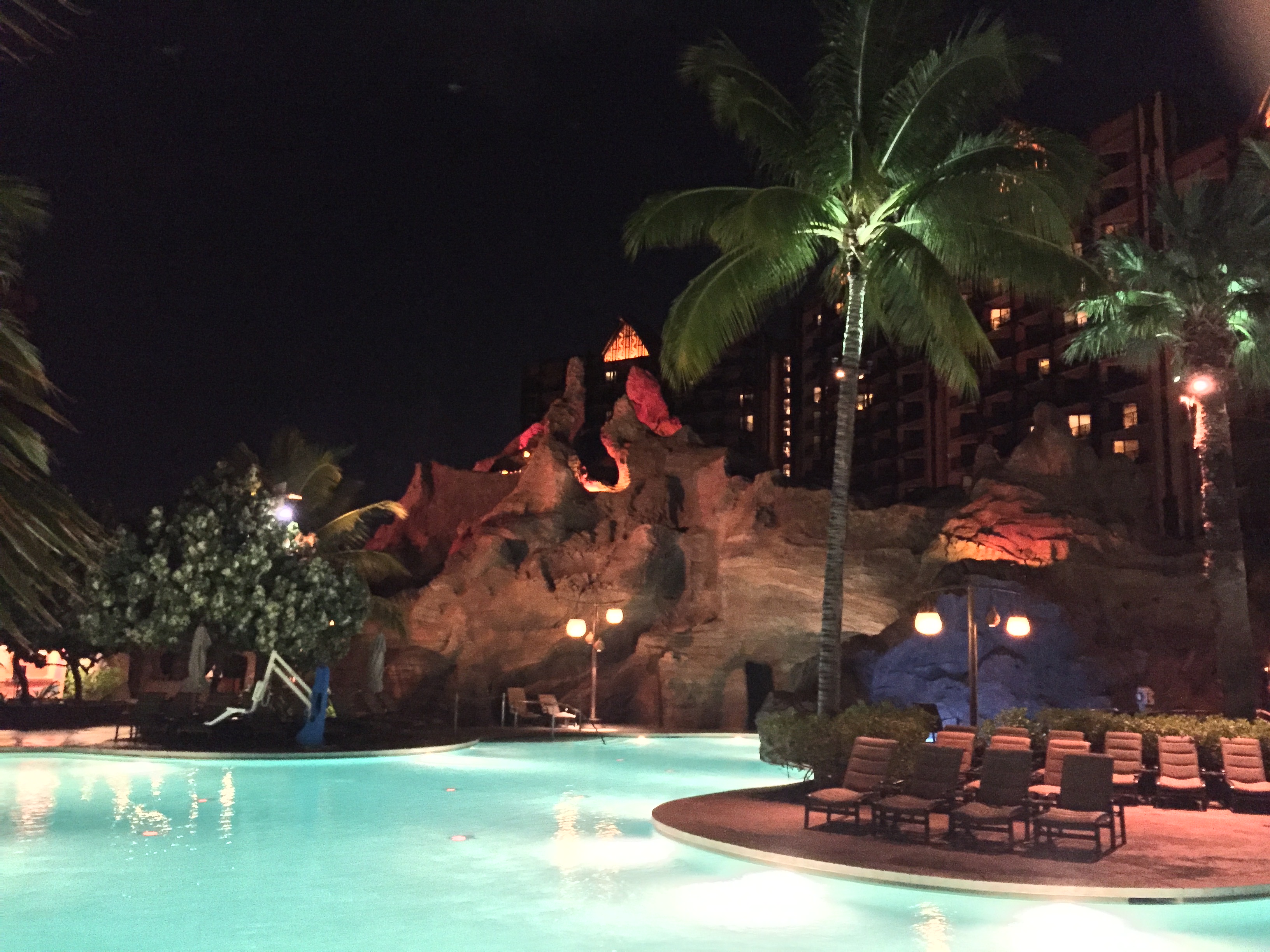 Aulani is designed around this theme. It starts when you’re traveling toward the resort, which is located in the Ko Olina resort area on Oahu. You’re driving through freeways over rolling hills, and to the left you see these monoliths of development sitting in front of a great ocean. There are three of them. One of them is white while another is beige, both of them are familiar. “Those are big, expensive resorts!”, you think. The third one is unlike the other two. It’s brown, and from far away you can see that it almost looks hobbled together.

It’s not, of course. It’s designed and constructed to look like it was crafted by ancient Hawaiians. There are elaborate fountains and fire torches in the driveway. And the entrance is minimalistic, an open-air area that gives you a wonderful look at the “valley” in the heart of the resort. Things look like they’re made out of wood and dried leaves, but they’re not. There are more fountains that look like they were lifted out from the more natural areas of the inner island.

As you get acclimated, you hear the soundtrack of the resort. It’s a series of custom Hawaiian songs made by a local artist. It’s a wonderful trick, one that Disney pulls off at its theme parks. It makes the environment feel more authentic than it actually is. It’s loud enough to notice, but subtle enough to not distract you from conversations or the thoughts in your head. Like the best soundtracks, it evokes feelings without being noticeable. 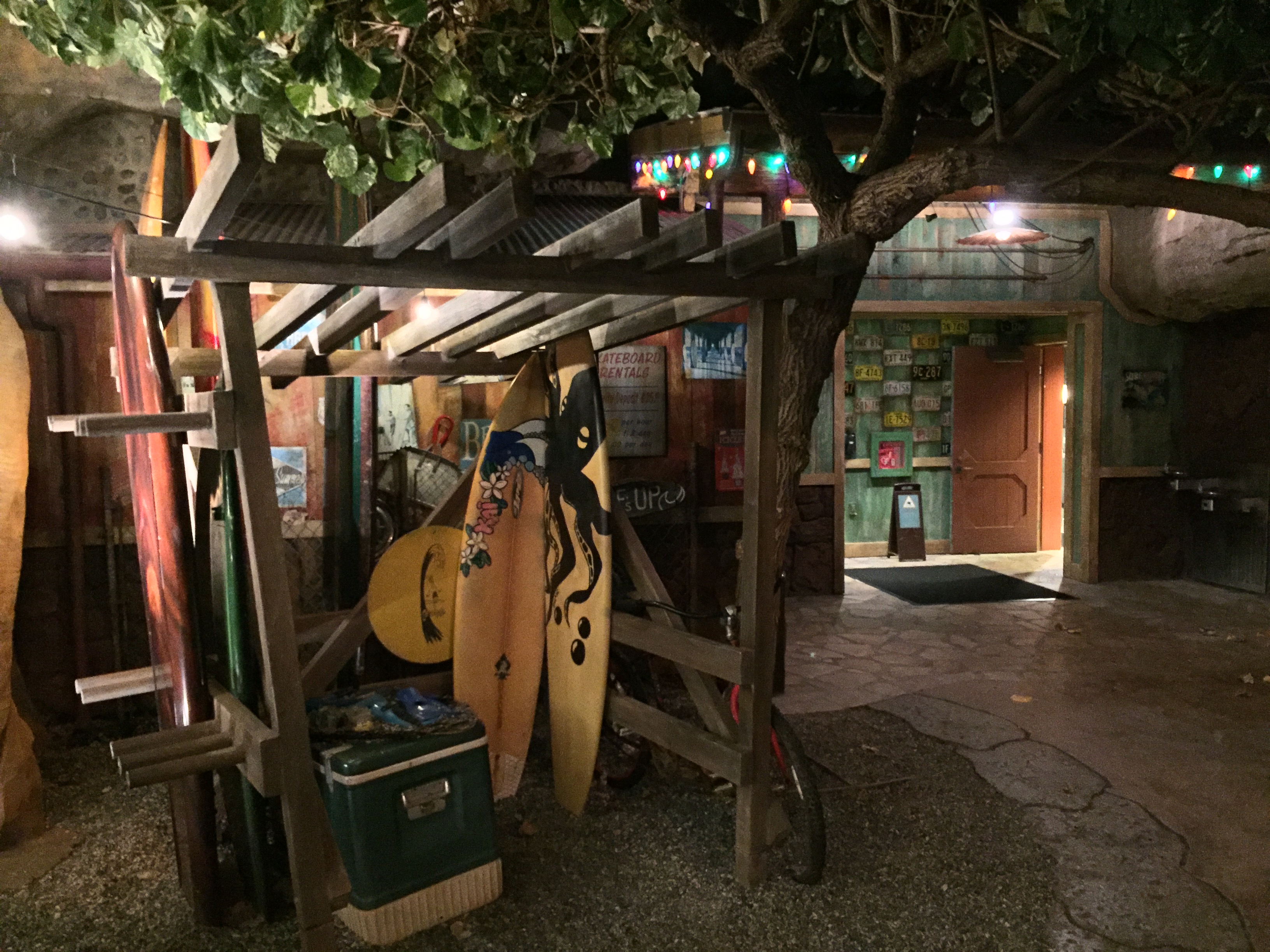 Sooner or later, you notice that this theme begins to build outwards. The resort is built for families, adults who bring their kids to a resort they’ll actually have fun in. So, of course, Mickey Mouse and his pals are running around taking pictures and doing things. Disney uses these familiar characters to bridge the gap into Hawaiian culture. “Here’s a thing you know, follow it to learn about the thing you don’t!”

That’s exactly what happens at the character breakfast at Makahiki, the buffet place at Aulani. Watching Mickey and friends walk and dance around, coming to your table and infectiously interacting with you, is the draw. That segues into something else, which is that the breakfast is hosted by Aunty.

Before we move on, you should know that Aulani is filled with Aunties and Uncles, folks who are master storytellers and entertainers. They’re pretty much Hawaiian versions of that one aunt or uncle you have who tells stories, except much better (no offense, my aunties and uncles).

Aunty teaches you a little bit about Hawaiian culture and tells you stories, but she also leads a celebration. She teaches kids authentic Hawaiian dances, she sings Hawaiian songs and tells you the meaning behind them, and, most importantly, she tries her very best to make the contingent of people eating breakfast buffet together to feel like a family, or ohana.

The idea of ohana is important in Hawaii. It’s family, but it’s not only direct family. It’s also the friends that make up your extended family, and getting everyone together to feast and tell stories is a big part of Hawaiian culture. That’s the goal behind the breakfast, and the bridge that’s being gapped by the recognizable characters. Here’s what you know, now follow that as we create this new thing for you. 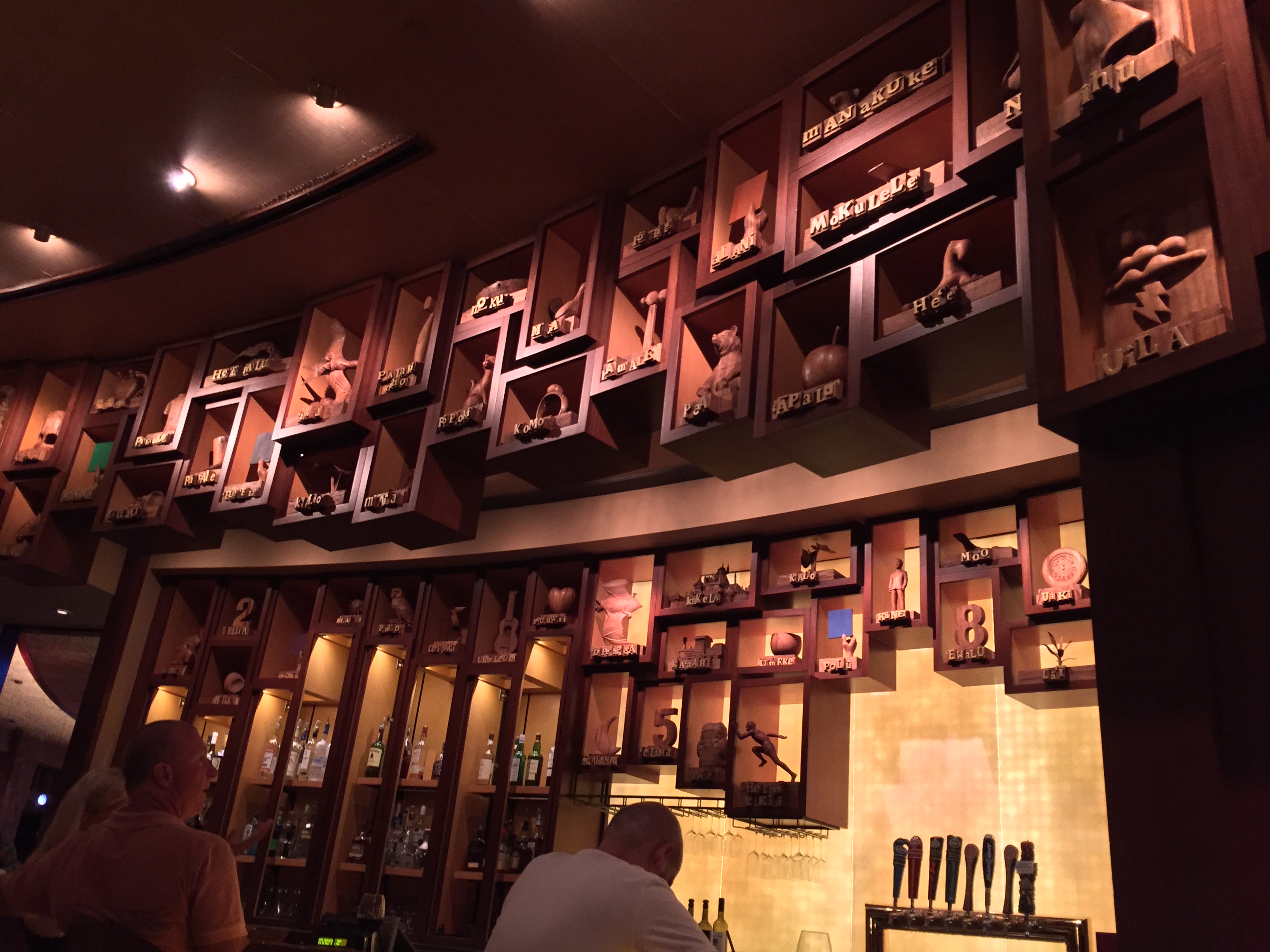 Next door to Makahiki is The Olelo Room, a bar and lounge with a unique twist. Every employee at the bar has to speak fluent Hawaiian. Everyone goes to a bar for either alcohol or bar food, and that serves as a bridge to another aspect of Hawaiian culture. In this case, the language. The bar is filled with little wood-carved images of things you may recognize. A boat, a car, keys, whatever. Underneath the images are the Hawaiian word for that image. For instance, there’ll be a picture of a key and underneath that you’ll see the word “ki,” which is Hawaiian for key.

You could, and I have, easily spend 30 minutes to an hour in this bar looking at all the words and learning. You could also engage with your waiter or bar tender and learn some of the language, because that’s what they’re supposed to do. That’s why they’re required to learn the language, they’re your point into another aspect of the culture.

When you’re done eating and drinking, you’ll likely be walking around or swimming or something. Here, too, are the details that help make up experiential storytelling. You’ll notice bigger things, like Hawaiian instruments littered around and replicas of artifacts of things ancient Hawaiians used. Then you’ll notice smaller oddities, like these little stone statues, burrows, and incomplete construction. These are the work of the menehune. In Hawaiian mythology, these are small creatures that only come out at night. They’re craftspeople, so they like building things. That’s why you’ll see their little tools all over the place, or why you’ll see their burrows. They’re shy and like to hide near trees or in caves, and that’s where you’ll find them. There are 300 of these little menehune statues all over the resort, hiding in the foliage next to the lazy river, or in various restaurants, or in the snorkeling pool, or up in the corner of one of the elevators. They’re everywhere.

At Disney parks, people love to look for “Hidden Mickeys,” images if Mickey’s silhouette hidden amongst other things. This is the Aulani take on that, although there are plenty of Hidden Mickeys to find there. At first, you’ll be at a loss for what these random little statues are. Until curiosity gets the better of you and you finally ask, and all of a sudden you learn a little bit more about Hawaiian culture. Or, your kid learns this at one of the kids’ activities and relays the information to you. Either way, another bridge is built.

These ideas are built into the entertainment and activities as well. You can go snorkeling and see some native fish to Hawaii. You can also go out at night and learn how ancient Hawaiians used the stars to navigate. You can attend the Starlit Hui, a nighttime show teaching you about Hawaiian music and instruments. And then there’s my favorite. 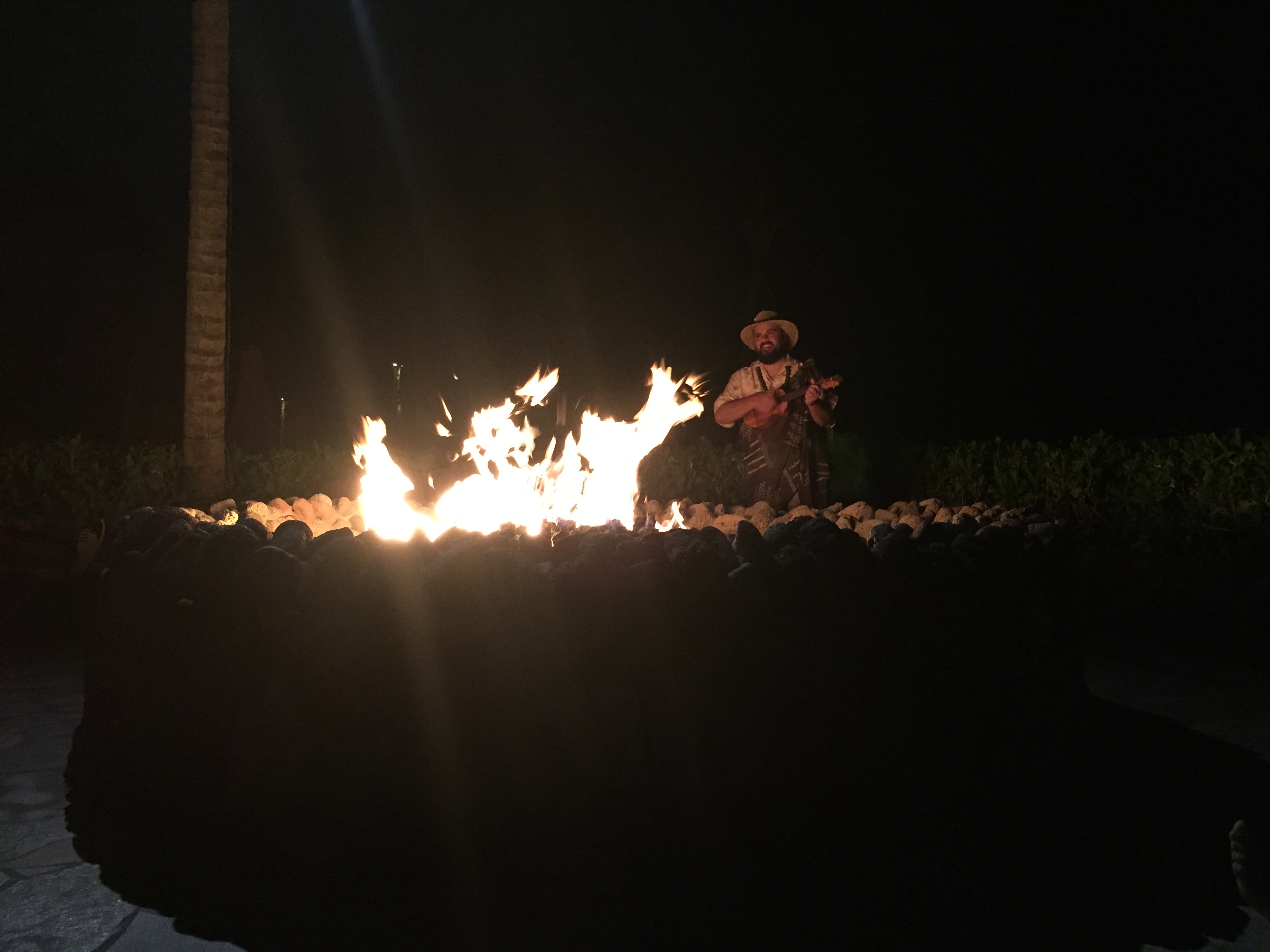 Uncle took his cane, spun it above his head and struck the fireplace. Flames flew into the air, the crowd let out an “ooh” as Uncle launched into his story. He was going to tell us the story about a princess and a pauper, an old Hawaiian tale about how two flowers came to be. It’s a beautiful story, and Uncle told it with the verve of a traditional storyteller. He only used the power of his voice, and his skills on a ukulele, to tell us the tale. He made us sing, he made us dance, he made us forget that we were at a resort.

When the story was finished, he spun his cane above his head and tapped the fireplace. The fire instantly extinguished, he told us he needed to get back to those lightbulbs, he left.

The kind of experiential storytelling that Disney and Universal uses isn’t perfect. The immersion is broken by other people, but when they get it right you really do feel transported into a different world. You’re not where you usually live, or at some regular hotel or resort, you’re in a completely different world. And when it’s used right, in a targeted manner, you can actually learn something. 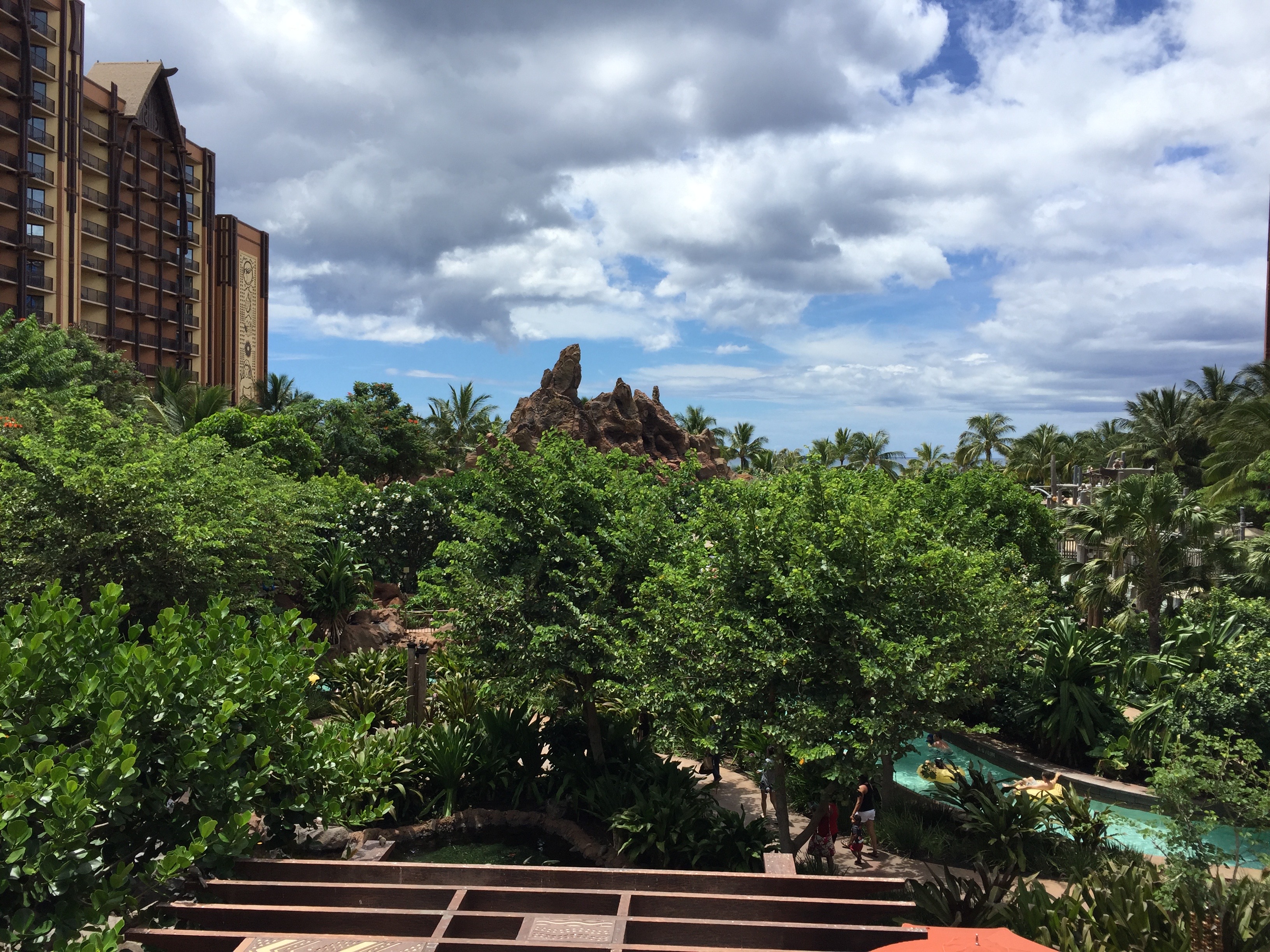 (1)I need to point out that Disney isn’t the only company that themes their resort or hotel. This has been done by other companies, and plenty of them.

The one undisputable thing about the film is that it's being billed as the end of The Skywalker Saga, a 9-film, 3-trilogy epic about, well, the Skywalker family. That means that The Rise of Skywalker has a couple things it needs to do.

Game of Thrones’ final season has baffled, angered, thrilled and depressed viewers, which is fitting as it’s a show that has done all of that through its 73 episodes, but now it's come to an end. It’s always a bit difficult to grapple with the end of a

2018 felt like an eternity, but it did bring a number of movies, TV shows, video games and books to indulge in. A lot of these were good, some of them were great. With all the entertainment options we have at our disposal, it can be easy to miss some